As America gained its independence, William Smith brought his innovative model of higher education to Chestertown. Here, with the support of George Washington and other wealthy landowners, Smith established the first college chartered in the new United States. Its uniquely secular mission embraced as its tenets independent thought, a spirit of modernity, and broad-based civic engagement for Maryland’s privileged sons. 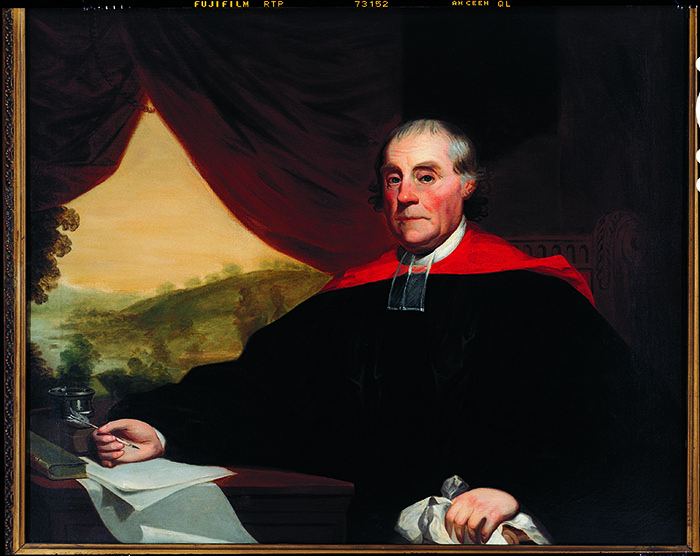 A Visionary for American Higher Education

An eminent recent historian of American higher education, Roger Geiger, calls William Smith "the most progressive college leader of the colonial era." Drawing inspiration from the Enlightenment, Smith began developing his revolutionary vision decades before the American Revolution itself. A Scottish immigrant with degrees from Oxford and the University of Aberdeen, Smith recognized that the New World offered opportunities for a radically new model of higher education. In a 1753 essay, at the age of just 26, he imagined a utopian college in a fictitious American colony that he called Mirania (Latin for the “land of marvels”).

This College of Mirania was not a cloistered quadrangle like the old  British universities, but rather a hilltop “public garden” above a river, where professors and students gathered in conversation outdoors, observing both the untamed wilderness and the turrets and spires of a nearby city — examining and discussing not just books, but also plants, trees, and fossils. They read not only Greek and Latin, but also modern languages and literature, thus learning to express their own thoughts through “writing, speaking, acting, and living well.” They studied modern history, including American history — since, as Smith wrote, this would teach youth to be “citizens of the world, [doing] impartial justice to the virtues of every people and nation,” thus fostering “civil and religious liberty.” In the realm of Mirania, the liberal arts were not just delightful, but also useful and practical, fostering knowledge that equipped students to undertake “the business of life.”

Smith joined the University of Pennsylvania as its first provost, recruited by Benjamin Franklin. He succeeded to a degree in establishing his ideas there, but not fully – he was thwarted by his own rather difficult personality, gift for alienating powerful allies, and rivalry with the new school’s other leaders, including Franklin himself. In 1780, Smith came to Chestertown for a new start and the opportunity to bring his idea for the liberal arts to life.

He did so with the financial support of wealthy landowners—many of whom were slaveholders—and the labor of his own enslaved individuals.

The Episcopal minister was known to have owned at least three enslaved individuals—one of whom twice attempted to escape. When Smith arrived in Chestertown with his family, he brought one enslaved person with him, a teenager or young woman named Dinah. She likely worked in the Smith home under Rebecca Smith’s direction. After the move to Maryland, William Smith acquired a boy named Primus—described as “a favorite negro body-servant of Dr. Smith”—in 1783. Primus, who was part of the Smith household for nearly 20 years, died in May 1801. Primus’s successor, a young man named Cyrus, was not nearly as endeared by the Smith family. The twice-captured runaway was put up for sale or hire in a February 1803 advertisement that described him as an able farm worker “immoderately given to drink”—a characteristic Cyrus apparently shared with his master.

Washington College history books have hailed the founder of Washington College as “a man of great energy and ambition” who transformed the Kent County Free School (established in 1723) into a liberal arts and sciences institution with a focus on citizenship and public service. To raise the £10,000 the State of Maryland required for the college charter, Smith canvassed the wealthy planters of Maryland’s Eastern Shore counties into Virginia.

What remained unsaid is that many, if not most, of those landowners were slaveholders. From the 1790 Census data Albin Kowaleski ’07 was able to locate pertaining to the College’s 356 original donors, only 14 did not own slaves. The numbers of enslaved people claimed ranged from a high of 305 (held by wealthy planter Edward Lloyd of Queen Anne’s County) to a single slave, in the case of several donors. The first subscribers included some of Maryland’s most prominent citizens. In addition to Lloyd, the list of early subscribers included future Governor William Paca, several members of the prominent Goldsborough family, and, of course, George Washington. The largest number of donors came from Kent County, ranked fourth overall in slaveholding—795 individuals claimed by 58 owners.

During his nine-year tenure as president of Washington College, the Rev. William Smith sought to model “the College at Chester” after the College of Philadelphia, following the philosophy outlined in his pamphlet, A General Idea of the College of Mirania. The curriculum included algebra, the 12 books of Euclid, geometry, astronomy, navigation, logic, Latin and Greek, ethics, natural history, philosophy, rhetoric, poetry, agriculture, history, plant study, anatomy, and biblical study.

Smith also saw to the construction of a massive structure erected on what is now Cater Walk. The building burned in 1827 and the more modest Middle Hall was erected its place. After conferring an honorary degree upon George Washington in 1789, Smith returned to the College of Philadelphia.

After securing the Maryland charter for a college whose mission was to educate responsible citizens for a new democracy, raising 5,000 pounds from wealthy landowners, seeing to the construction of a massive college building (depicted in “A View of Chestertown from White House Farm”), and conferring an honorary degree upon George Washington in 1789, Smith returned to the College of Philadelphia as provost. That appointment lasted only a year. When the College was absorbed by the University of Pennsylvania in 1792, Smith was not retained.

Apparently, Smith was not easy to like. Contemporary critics described him as “haughty, slovenly … often offensive in company,” and “toward the end of his life, an habitual drunkard.” The final damning fact? None of his children attended his funeral.

College president Gilbert Mead described him as “high-tempered, irascible, and powerfully controversial, he was either friend or enemy of every man of importance in the colonies between the Carolinas and Massachusetts. Vocally, his critics outnumbered his friends.”