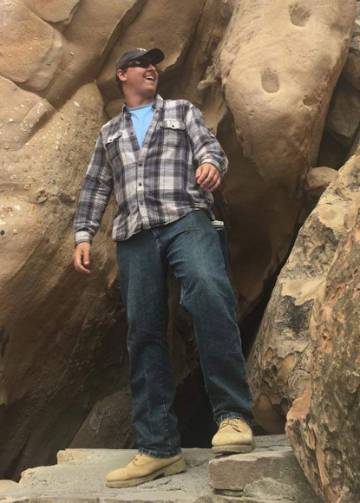 A “practice” college interview for a high school student from New York turned into the real deal once he dug into the anthropology offerings at Washington College.

Chris Fuchs ’20 applied to Washington College on a whim. But his undergraduate experience has been anything but capricious. With a double major in anthropology and philosophy, Chris now has skill sets, the curiosity, and the cultural sensitivity he needs to work as a federal archaeologist on lands where ancient populations once dwelled.

Drawn to the field of archaeology, Chris soon found a kindred spirit in Aaron Lampman, Associate Professor of Anthropology, who spent part of his adolescence in the Southwest and who runs the Southwest Seminar with Department Chair Julie Markin. For Chris, this novel experience was life-changing.

“The Southwest Seminar was my first exposure to cultures of the Southwest U.S. I fell in love with it out there. So, when I told Dr. Lampman I was interested in going back the following summer he suggested I look at the National Science Foundation’s REU (Research Experiences for Undergraduates) program. They had a six-week archaeology field school offered through the University of Arizona.”

After being waitlisted, Chris got the news he had hoped for. A spot became available and he would be heading to New Mexico for six weeks. Surveying and excavating a Salado site along the Gila River in New Mexico, Chris and his fellow team members found evidence of migration patterns of cliff dwellers, their interactions with Southern peoples, and perhaps a new religion.

“A new expression starts to show up on pottery right before the Spanish made their way to that area,” says Chris, who is fascinated by what ancient artifacts reveal. “To see people’s possessions, how they built their homes, the tools they used, how they decorated, tells us a lot about who we are today.”

But he is equally aware that as an archaeologist he is treading on hallowed ground; he chose as the topic of his Senior Capstone Experience “virtue ethics”—defining the character traits archaeologists should have to ensure that they excavate in an ethical fashion.

“There’s a level of integrity that the scientific process provides, but as we work with descendent communities and those mindful of the Native American Grave and Repatriation Act, we must recognize that our responsibility is to the people, not just to the artifacts or to science. There’s a human component here that’s just as important. And the question remains, should they trust us with their culture—a culture that we impose on what their ancestors left behind?”

It’s a topic of keen interest to Archaeology Southwest, the nonprofit organization that ran the field school Chris attended. He has been invited to present his thesis as part of a panel discussion at the Society for American Archaeology conference in Austin, Texas, this April.

Then after graduation, Chris hopes to return to the Southwest to do more digging. He is applying for jobs through the National Park Service, which is putting survey teams together to identify new sites of significant archaeological value.

Chris came to WC because of its anthropology program and took Introduction to Anthropology in his very first semester. “I built a good relationship with Prof. Lampman and he ended up as my advisor. His Southwest Seminar was also my first exposure to cultures of the Southwest United States. I fell in love with it out there.”

Chris took part in WC’s annual expedition to the Four Corners region of the United States, organized by anthropology professors Aaron Lampan and Julie Markin. Visiting the ancient Anasazi Ruins of Chaco Canyon and Mesa Verde, as well as the living American Indian Reservations of the Navajo, Hopi, and Pueblos, they learned how ancient and modern peoples adapted to the high desert environment. [link Southwest Summer Seminar]

Itching to return to the Southwest, Chris applied for an NSF grant to participate in a dig on a Salado site along the Gila River in New Mexico. Operated by the University of Arizona (#2 in the world for anthropology), the archaeological field school offered new clues about ancient migration patterns, population interactions, religion, and artistic expression.

Chris is applying for government archaeology jobs offered through the Department of Agriculture that might take him back to the Southwest. “That’s where a lot of the money is for archaeology jobs,” he says. “If a project is going to go through federal land or is funded by federal money, you have to do an archaeological survey of the area.”