Traveling on the Cuba Experience class over winter break, Rachel Brown ’16 used a Cater Society grant to develop a unique project with the help of three local Havana women. 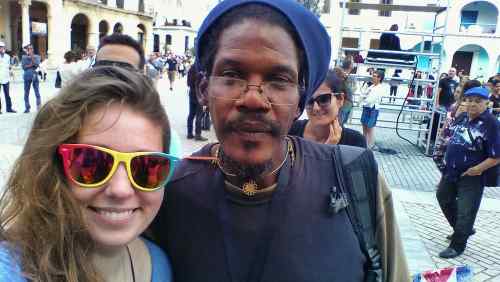 When she visits another country (which is as often as she can), Rachel Brown ’16 is far less interested in being a tourist than a traveler. For the double major in anthropology and Hispanic studies, the most intriguing conversations and experiences have everything to do with the ordinary—what and how people of a particular place move through their everyday lives.

This was the motivation that inspired her recent Cater Society-funded project in Cuba, where she wanted to compare perceptions of Havana from the points of view of an American woman (herself) and local women. Traveling during winter break with the Cuban Experience trip led by Kenneth Schweitzer, associate professor of music, and Aaron Lampman, associate professor of anthropology, Brown got to know three of the women with whom the students were staying, offered them disposable cameras, and asked them to spend a few days taking photographs “of what was important to them.”

“Tourism is an interesting thing because it’s their main industry, their main source of revenue as a country, and it does have the ability to facilitate real cultural exchange,” Brown says. “But it’s also really exploitative in a lot of ways and very superficial. And I do not want that. I’ve never wanted that. I’m interested in the lady on the bus who tells me the story, or the lady who’s cooking my meals and saying, ‘I love going to the Malecón because I’ve always loved the ocean for this reason and this reason.’ And that’s what I really want, and that’s what they wanted too, and so the project worked pretty well.

“I really can’t emphasize enough how excited they were. I think they felt they had this opportunity to show this stranger what’s important to them, what they love, and they were very cognizant of that and willing to take advantage of it.”

The women were Maria Julia González Bautista, 77; Alina Sánchez Vargas, 54; and Devora Moreno Ortiz, 54. Each kept a camera for three to four days, and Brown also interviewed each of them about what photography meant to them. None of them was a novice with the camera, and Brown says some of the images, in composition and subject, were “amazing.”

“Devora was the one who loved the Malecón [the esplanade that stretches along the Havana waterfront], so she had these photos of dawn on the Malecón and these men who were fishing before the tide came in too much. She also really likes dancing, so she took a lot of pictures of people who were grooving a little bit with the bands that were playing at night along the Malecón. Alina had taken pictures on her errands buying bread and stuff, so she has great pictures of somebody with a push cart who goes down the street selling bread or fruit.”

Brown wrote a research paper and presentation for the Cater Society, and for the class itself she also created a media journal and a website where she has posted some 200 of the 1,000 or so images she took, as well as snippets of audio, video, and other elements of life in Havana as seen through her eyes. Once she gets permission from her Cuban photographers to post their images, she will add them as well. You can see her images and read her blog here: http://rachelebrown17.wix.com/cubaexperience2016

“What I learned in a new and visceral way is that I can’t perceive fully everything I want to perceive,” she says. “There were times when the unfamiliar Cuban Spanish frustrated me, or prevented me from having a really deep conversation; there were times I was simply too tired to enthusiastically and energetically in engage in everything that was happening. So to combat this fundamental inability to really soak up everything, I resorted to collecting everything I could, knowing I’d have to reengage with it later when I was physically and mentally capable of doing so. I was surprised by how difficult this was. But I’m also doubly excited to pursue this kind of work in my future career.”

Brown is considering applying for a Fulbright Scholarship or to the Peace Corps, with hopes of being accepted and stationed somewhere in South America. Meantime, she just received a Comegys Bight Fellowship through the C.V. Starr Center for the Study of the American Experience to work at the Library of Congress Publishing Office after graduating in May.

While at Washington College, Brown spent a semester abroad studying in Quito, Ecuador, worked as an associate with the Starr Center helping with the StoryQuest oral history project, and traveled to the desert southwest where she studied the Navajo language and its role in contemporary Navajo culture, as well as the poetry of the Navajo Nation’s first poet laureate, Luci Tapahonso.