Mike Hudson’s longtime loves of birding and writing have thrived during his time at Washington College. Now set to graduate this spring, he’s already combined these skills to land a position as co-editor of a pre-eminent national birding journal. 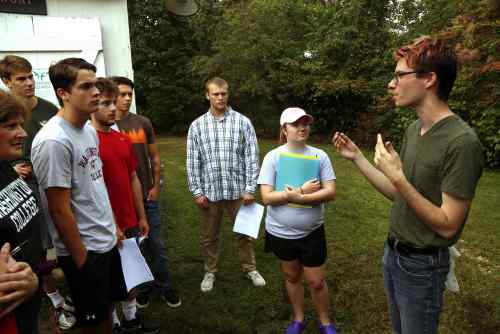 Most Washington College students would count themselves lucky and excited to have an essay they’d written for a class accepted for publication in a national journal. But Mike Hudson ’18 can go a couple of steps further than that. Not only is an essay he wrote for an introduction to non-fiction class the lead piece for the winter issue of North American Birds, Hudson graduates in May already co-editor of the venerable publication of record for birding enthusiasts and researchers.
Since last spring, Hudson has been juggling his busy college schedule with his new role as co-editor along with Tom Reed of North American Birds (NAB), a quarterly publication of the American Birding Association (ABA) based in Delaware City, Delaware. “Mike and Tom, twentysomething field ornithologists based in Maryland and New Jersey, respectively, are dyed-in-the-wool birders deeply committed to the rigorous scientific traditions of North American Birds,” Ted Floyd, editor of Birding Magazine, who has been helping the new editors learn the ropes, wrote on the ABA blog last April. “These two are wonderful.”

For anyone who knows Hudson, a biology major and English minor, this maybe isn’t so surprising. Birding is a small, passionate world, and Hudson was already deeply immersed in it when he came to Washington College, drawn in part by Foreman’s Branch Bird Observatory at the College’s River and Field Campus (RAFC). From the moment he set foot on campus, Hudson has been a frequent intern and perpetual volunteer at the banding station and at RAFC’s Chester River Field Research Station, riding his bike there at all hours before he finally got a car.

Hudson has been a devoted birder since he was a boy growing up near Baltimore. “I started birding when I was maybe six or seven, my grandfather got me into it,” he says. His other mentor was Bill Stewart, who became the director of ABA’s Young Birder Program. Hudson participated in that program, and by the time he was in high school, the ABA was hiring him as an intern and staff assistant at its birding camps for youngsters. “So I’ve kind of been involved with the ABA since even before the people who are running it now,” he says.

When he learned last year that NAB’s longtime editor was retiring, and that the journal was seeking some new editorial blood, he grabbed the opportunity.

“North American Birds, which has a very old history … has always been the same thing. It’s always been a journal that chronicles the changes in American bird status and distribution,” Hudson says. By gathering and analyzing reports from birders across the continent, the journal documents changing bird populations, a topic more timely than ever today due to climate change. “The timing was good, they knew they wanted at least one and maybe two editors to take over, they wanted it to be two younger people, and they knew me.”

Hudson shares the lead-off essay, called “Changing Seasons,” with Reed, as well as editing and analyzing regional field reports, blogging, and other duties as they come up. They’re also working to help NAB change with the digital times, and this theme of change—both in the publication as well as in species or populations of birds that used to migrate but that now either don’t migrate at all or not as far—is what Hudson incorporated into his essay for Associate Professor of English Sean Meehan’s Introduction to Nonfiction class.

“Professor Meehan likes to play around with the rules a lot, and one of the things he said at the beginning of the class, he said when you’re writing an essay, you’re not so much writing as you are essaying, as a verb. He took it back to the etymology of the word,” Hudson says, which means “to attempt or try.” “I’d always liked intellectually the idea that when you’re writing an essay, you’re doing something more than just writing, you’re thinking about something bigger. So that was a big thing that changed it for me. It changed my perspective. And, defining what an essay is, a more holistic way of thinking about essay.”

Meehan says as part of his Introduction to Nonfiction class, he “challenges students to identify a real-world audience and publication for their essays… it is fascinating to see Mike put these skills to work, so directly and quickly, even before he graduates.”

In addition to his work at the banding station and RAFC, Hudson is a biology lab teaching assistant, a Writing Center tutor, and an associate member of Beta Beta Beta, the national honor society in biology.

Along with his work as co-editor of NAB, he has several possible avenues after he graduates. A longtime volunteer at the Maryland Zoo in Baltimore who helped run its youth program last summer, he also taught their teen instructors in conservation and ecology, and he may pursue a possible opening in the zoo’s education department. He has also considered becoming more deeply involved in the ABA’s Young Birder Program.

“I don’t know exactly what I want to do, but it will involve birds or other animals, and one of the things I’m realizing … is that my favorite things involve education somehow,” Hudson says. Even talking to students who visit Foreman’s Branch has shown him this, along with his work at the zoo and through ABA. “The things I have done that have stayed with me the most are things that aren’t just me doing field research or bird rehabilitation,” he says. “It’s education, outreach, and conservation.”