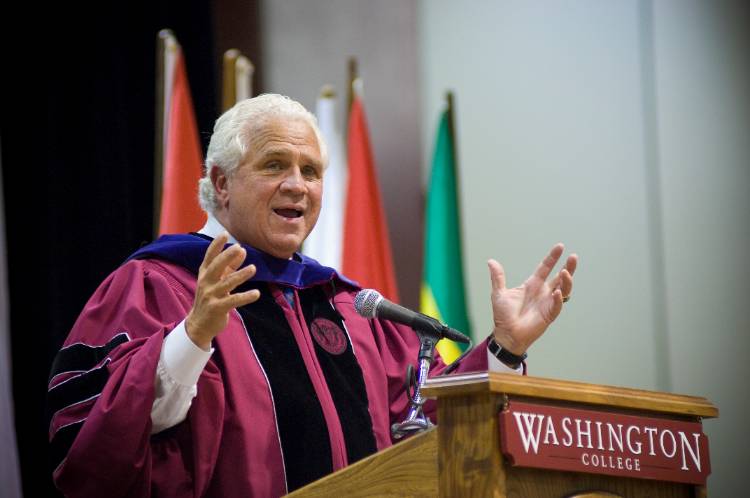 Governor Larry Hogan today announced that he will be providing $1 million to Washington College in his forthcoming Fiscal Year 2023 budget proposal to fund a new senior position within the Starr Center for the Study of the American Experience to honor the historic legacy of long-time Maryland Senate President Thomas V. “Mike” Miller, Jr., who passed away in January of this year.

The Miller Director of Civic Engagement will oversee programs that utilize history to address contemporary challenges and involve Washington College students in projects that imbue them with a sense of civic responsibility toward their communities, state, and nation.

“I can think of no better way to honor President Miller’s life and cement his legacy than to fund this directorship dedicated to supporting the very principles to which my good friend committed his historic career in public service,” said Governor Hogan.  “The programs that this endowment makes possible will instill in future generations the same civic mindedness, appreciation of history, and love for our state that made President Miller a giant in Maryland politics for so many decades.”

The Starr Center is a nationally recognized interdisciplinary institute that combines liberal arts and public service through civic engagement programs that serve as models for other institutions of higher education throughout Maryland and across the country.

President Miller was a longtime friend and ardent supporter of Washington College. In 2007, he received an honorary Doctor of Laws Degree in recognition of his leadership and commitment to the education and welfare of all Marylanders.

“I am delighted that Governor Hogan has taken this opportunity to celebrate the enormous scope of Mike Miller’s contributions to the State of Maryland through the establishment of the Miller Director of Civic Engagement,” said Jack S. Griswold, longtime chair of the Board of Visitors and Governors and former president of Washington College.  “Mike was a great friend to the College and to me personally, and I am overwhelmed that his heritage of leadership and public service will be preserved through this important work, engaging our students with our communities, state, and nation.”

“Governor Hogan’s decision will benefit students throughout Washington College, as well as members of the broader community,” said Adam Goodheart, the Starr Center’s Hodson Trust-Griswold Director. “The Starr Center’s new Miller Director of Civic Engagement will work with faculty from many departments to create dynamic learning and service opportunities on and off campus. This educator will instill a deep commitment to social justice, personal ethics, and public service — setting our undergraduates on course to lead lives of purpose and passion.”

Programs initiated, led, and supported by the Miller Director of Civic Engagement will include:

Chartered by the Maryland General Assembly in 1782, Washington College is the oldest institution of higher education in the state and was the first college founded in the newly independent United States.