Seth Olson ’09 begins the MBA program at Yale School of Management this July. 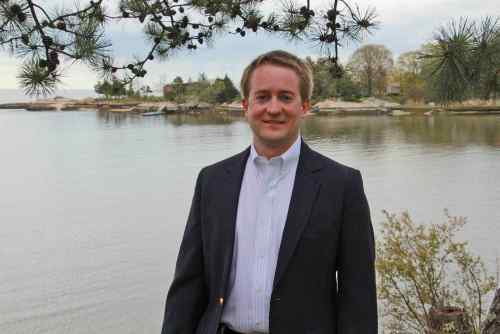 When Seth Olson ’09 graduated from WC, the U.S. economy was on the rocks and his career prospects were slim. “I graduated at the very bottom of the Great Recession’s job market without a job and a lot of student loan debt,” he says.
Fast forward eight years, and Olson, a double major in economics and political science, is now in the graduate program at Yale School of Management. “It’s a dream come true,” he said.
To get through that first uncertain year after graduation, Olson coached youth sailing, worked on a successful Virginia House of Delegates campaign, and canvassed for the U.S. Census Bureau Office while he searched for a more permanent career.
He landed his first position at Bridgewater Associates, a Connecticut-based hedge fund, in 2010. “After Washington College, I knew that I wanted to work for at least a few years to figure out what I was really interested in, develop my skills, and expand my life experience,” he said.
He worked at Bridgewater for seven years before deciding to pursue graduate school. This process was another test of his persistence.
Olson spent nine long months studying for standardized tests, drafting essays, and completing applications. His hard work paid off when he was accepted to Yale, University of Chicago, and Georgetown. It was ultimately the prospect of attending Yale that excited him the most.
“When I finally got that last call, I could barely believe it—Yale School of Management was not only accepting me but offering a partial scholarship,” he says.
Olson hopes to use his graduate education to make a difference in financial literary education, financial inclusion, and consumer financial protection. The goals were sparked by his experiences as an undergrad.
“By funding my internship with the U.S. Senate Banking Committee during the heart of the financial crisis, the Douglass Cater Society of Junior Fellows allowed me to see firsthand the terrible personal and national costs caused by shortcomings in America’s financial markets,” he notes. “The education and leadership opportunities I pursued as an undergraduate at WAC have been an incredibly strong foundation that has enabled me to evolve from a young college graduate into a seasoned professional, and now a Yale graduate student.”