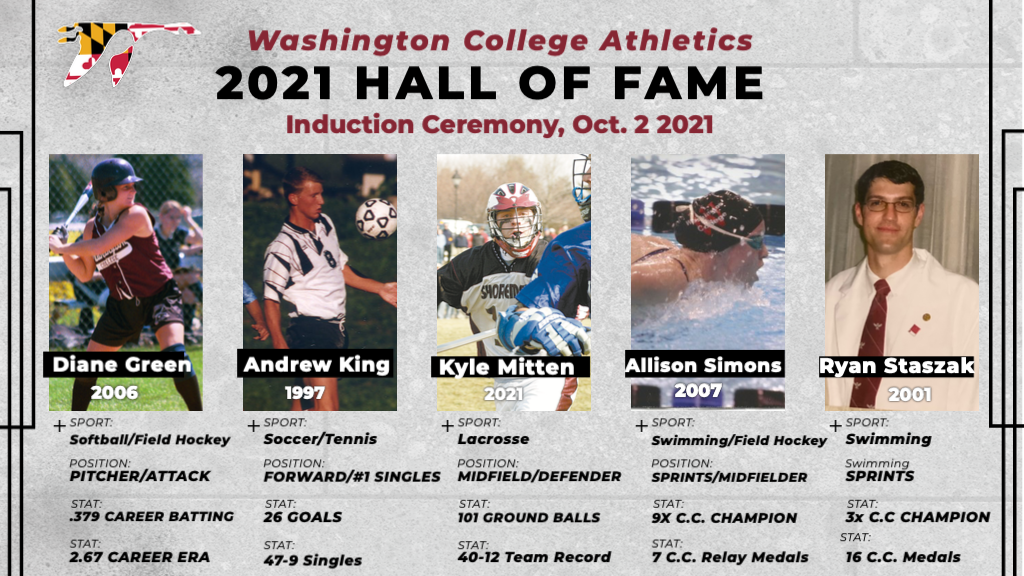 These accomplished alums were officially inducted during the 40th Annual Hall of Fame ceremony, which included a cocktail hour in the Miller Library, followed by the HOF dinner and ceremony in the Hynson Lounge.

President Sosulski, who formally welcomed guests to the HOF event, spoke about the power of sport to both inspire and unify, and the bonds that develop while working together towards a common goal. “We are grateful to have this chance, once a year, to stop and recognize excellence as we welcome a new group of inductees to the Hall of Fame family,” he said.

About the 2021 HOF Inductees

Green, who ranks among the top 10 in many hitting and pitching categories, enjoyed a career .379 batting average and had a 2.67 ERA on the mound. In 2005, she led the Shorewomen to their first Centennial Conference Tournament berth. Green was a 2004 & 2005 All-Centennial Conference first team pick and earned 2004 All-Region second team honors. A three-time Team Most Valuable Player, she received the 2006 Senior Athletic Award. Green still holds the career record with 46 complete games and hit .474 in 2004, the second-highest season mark in program history. Green slugged .784 in 2004 (still a single-season record) and hit a then-record seven home runs in 2004. She also played field hockey as a sophomore and junior.

Mitten made a major impact as a dominant long-stick midfielder and defenseman after transferring to Washington College prior to his sophomore season. He led the Shoremen to a NCAA Division III Tournament appearance in 2003 after the squad captured the Centennial Conference Championship. The following season, the Shoremen advanced all the way to the semifinals in the NCAA Division III Tournament after the team finished with an 18-3 mark. The team went 10-5 and advanced to the Centennial Conference Finals in 2005. Individually, Mitten was a 2004 All-American first team pick in 2004 and earned second team accolades in 2003 and 2005. He was a Centennial Conference first team pick all three years as well as an ECAC South All-Star. Mitten was selected to compete in the prestigious 2005 North-South Senior All-Star game and earned the athletic department's Senior Athletic Award. He finished with 101 ground balls during his career and led the team to a combined record of 40-12.

Staszak, who was the 2001 Eldridge Eliason Award honoree, was a 16-time Centennial Conference Championship medalist. The team-captain led the Shoremen to a team dual meet record of 27-14-1 during his tenure. Staszak was a 2001 NCAA Division III Championship participant in the 50 freestyle, 100 freestyle and 100 butterfly. A three-time individual Centennial Conference champion (50 freestyle, twice, 100 freestyle), he was also a member of two gold medal winning relay squads (400 medley, 200 freestyle relay). In addition, Staszak grabbed six silver medals (two individual, four relays) and five bronze medals (one individual, four relays). His school records in three relay events stood for many years and he currently ranks fourth in the 50 freestyle (21.21).

Since inductions began in 1981, the Washington College Athletic Hall of Fame serves to preserve the College's sport history, to honor excellence within the game, and to make a connection between the generations of people who cheer on our student athletes.