Even as comprehensive immigration reform stalls in Washington, Professor Robert Lynch’s research stands, proving the economic benefits of providing a pathway to citizenship for 11 million undocumented people living in the United States. 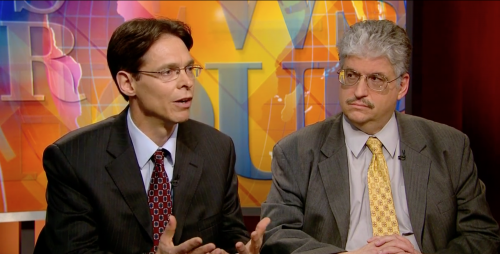 The road to citizenship for millions of immigrants seeking a better life in America is fraught with obstacles. The country is deeply divided on the issue, with opponents warning of detrimental impacts on the social fabric of America, along with heavy burdens on federal, state, and local budgets. But Robert Lynch, the newly appointed Young Ja Lim Professor of Economics at Washington College, takes a measured view, carefully calculating the costs and benefits of granting citizenship to 11 million people, including two million Dreamers.

The endowed professorship he holds was created with a $1 million gift from Jim Lim ’91, the son of South Korean immigrants. Lim earned a degree in economics at Washington College and an MBA in finance at Indiana University. The managing general partner of Greenspring Associates, he serves on the College’s Board of Visitors and Governors.

“I was doing this research and writing about it when the topic of immigration reform exploded in 2013,” says Lynch. “It was fun to watch the news to see Senator Dick Durbin, for example, on the Senate floor talking about immigration reform and he’d be pointing at a chart with all my numbers.”

On the strength of his methodological studies, Lynch was invited to participate in a number of debates and to testify before the House and the Senate on the costs and benefits of immigration. One of his amicus briefs to the United States Supreme Court addressed whether the Deferred Action for Parents of Americans and Lawful Permanent Residents (DAPA) would impose a net economic burden on Texas and other states in the case. Lynch again argued that DAPA recipients would pay more in state taxes than they received in state government benefits.

“At the time,” he recalls, “some groups who were less than careful in their research were putting out enormous numbers: one opposition group said that granting citizenship status would cost the U.S. $6.3 trillion in losses. A proponent said it would benefit the United States by $2.7 trillion. So, they were $9 trillion apart. I had been working on this for a year, and my numbers were much smaller. I was projecting a small positive effect over 10 years of $200 billion or about $20 billion a year, and a small positive employment effect.”

When the bipartisan Congressional Budget Office conducted their own analysis and came up with a net positive of about $197 billion over 10 years—a number nearly identical to Lynch’s—the press took notice. Lynch appeared on PBS’s NewsHour and wrote a half-dozen papers on what would happen to federally-funded programs like Medicare and Social Security if the U.S. were to grant legal status and a pathway to citizenship to 11 million people.

This issue is just one aspect of a career devoted to evaluating the adequacy and effectiveness of various federal, state and local government economic policies, reviewing government economic growth strategies, and studying the efficiency, fairness, and stability of state and local tax systems. For decades, he has collected data and analyzed the extent of income inequality in the United States, while considering what kinds of policies would narrow the income gap and raise overall standards of living. As a consultant for the Washington Center for Equitable Growth, he has evaluated various proposals to enhance education programs and provide widely shared economic growth. And as a research associate with the Economic Policy Institute, he evaluated the effects of state and local tax cuts, tax incentives, and public services on economic development and analyzed the benefits of investments in early childhood development—a topic of particular interest to him.

His landmark study, Exceptional Returns: Economic, Fiscal, and Social Benefits of Investment in Early Childhood Development, demonstrates that providing all 20 percent of the nation’s three- and four-year-old children who live in poverty with a high-quality early childhood education program would have a substantial payoff for governments and taxpayers in the future.

The benefits to parents and to society at large are equally significant—and there are parallels to immigration reform.