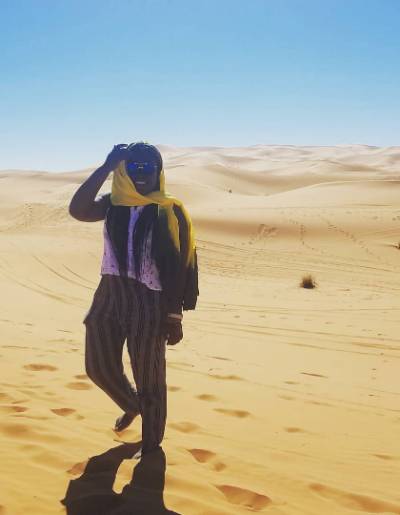 Felicia Attor has thrived as a chemistry and French double major on a pre-med track, but it has been her time off campus—during a semester abroad in Morocco and an internship in Thailand—that has helped her define the path she hopes to take in the future.

“Before junior year in college, I didn’t think about the policies that go into making primary health care accessible and affordable to all people, and that is something that has piqued my interest, especially after Thailand,” she says. The summer after her junior year, Felicia spent a month living with a family in rural northern Thailand, where she worked as an intern shadowing health professionals in the local clinic. She also conducted independent research, through a grant from the Douglass Cater Society of Junior Fellows, to analyze the accessibility and affordability of the Thai health system.

“I have such a big passion for public health and medicine in general, but I’m thinking about doing a master’s degree in global health disparities and then see if I still want to go to medical school after that or expand on the global health path,” she says.

During the fall of her junior year, Felicia spent the semester at Al Akhawayn University, where she studied primarily humanities, Arabic, and French. She enjoyed speaking in French so much that she decided to elevate it from a minor to a major when she returned to WC. She was able to maintain her chemistry major even while abroad thanks to help from her advisor in chemistry, Professor Anne Marteel-Parrish, (also a native French speaker).

“A lot of science majors have the impression that you can’t study abroad because you’re a science major, and it’s complicated,” Felicia says. “But Dr. Marteel was ready to sit down with me and plan out whole semesters and how it would go, so it’s been fantastic. She was willing to make it all work for me. I was doubling up on my course loads before and after going to Morocco so I am not behind at all in my chemistry degree.” Taking humanities classes while there helped fulfill her distribution requirements, so she could more fully focus on chemistry at WC.

“One thing I like about all my professors is that we have conversations outside of class, we talk about things that are not part of the classroom, and it’s always amazing to just sit and talk with them. They are very good listeners and give really good advice,” she says. For example, she enjoys talking with Jennifer Benson, chair and associate professor of philosophy, about news stories related to Benson’s work. “I will go there and we will talk about this news article and she will give me her perspective from academia and I will be, ‘Oh, I never thought of that.’ ’’

Felicia wasted no time landing internships, the first during the summer after her sophomore year, when she worked in the National Center for Advancing Translational Sciences, part of the National Institutes of Health in Washington, D.C., on cancer-related research.

Along with the Thailand internship last summer, Felicia also received a Cater grant to work one-on-one with Anna Smith, visiting professor in chemistry, synthesizing flavonoids for anti-aging research—work she will continue to do as part of her Senior Capstone Experience (SCE) for chemistry. Her French SCE will examine sub-Saharan immigration to Morocco and how European Union policies effect the human rights abuses that happen at the southern border there.

And, during winter break of her senior year, she’s joined the Cuba Experience course where she will continued independent research on public health accessibility and affordability, using that research to complement her work on the topic in Thailand.

“I came here undecided. I knew that I loved chemistry from high school but I didn’t know if I wanted to keep studying it. But my first semester I took general chemistry and I had a great experience, I really enjoyed it, and I decided to major in it.”

Learn by DoingInternhip at National Institutes of Health

The summer after her sophomore year Felicia worked in the National Center for Advancing Translational Sciences, part of the National Institutes of Health in Washington, D.C., on cancer-related research.

“A lot of science majors have the impression that you can’t study abroad because you’re a science major, and it’s complicated. But Dr. Marteel was ready to sit down with me and plan out whole semesters and how it would go…She was willing to make it all work for me.”

Felicia completed two SCEs. For chemistry, ongoing research in synthesizing flavonoids for anti-aging research. For her French SCE she examined sub-Saharan immigration to Morocco and how European Union policies effect the human rights abuses that happen at the southern border there.