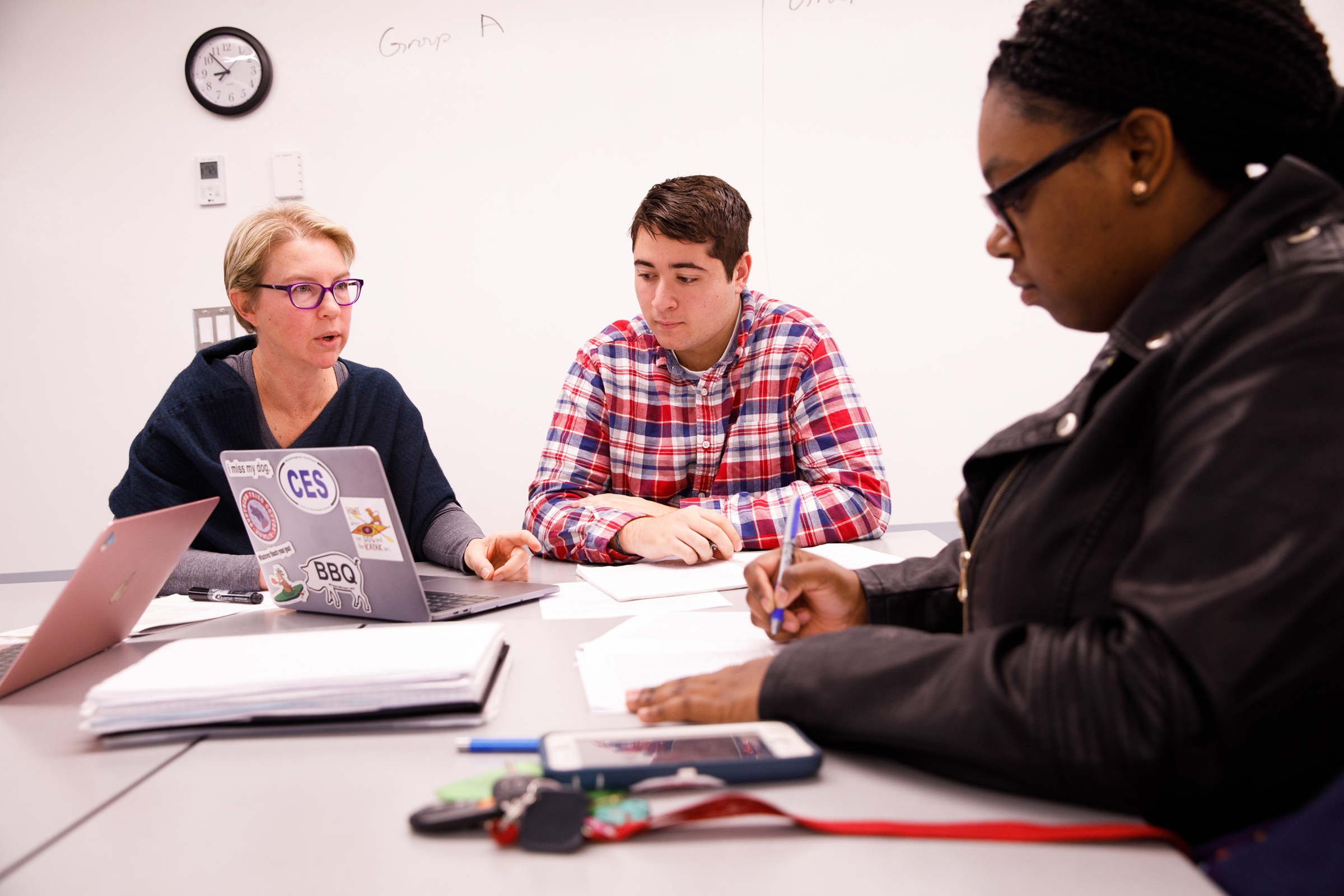 Philosophy comes from the Greek for “love of wisdom” (philo.sophia). Philosophy – traditionally at the center of the liberal arts – examines life’s fundamental questions. What is ultimately real? Who am I? What can I know? How do I decide right and wrong? Is there an ideal society? Philosophers using creative and analytical thinking inquire into these foundational problems about reality, knowledge, values, meaning, and society.

Most students of philosophy enjoy philosophy for its own sake. Life has a way of raising ultimate questions. Philosophy taps into the pleasures of the life of the mind. It is a conversation with the world’s most influential thinkers: Socrates, Aristotle, Aquinas, Locke, Kant, Marx, and Nietzsche. Philosophy affects all other disciplines. It investigates connections among art, literature, law, medicine, business, psychology, science, religion, politics, and the environment.

Religion opens the mind to a world of possibilities beyond the natural order. The study of religion fosters an appreciation for spiritual inquiry as well as respect for different religious traditions. Religious themes animate much of Western intellectual history, literature, and politics. Students in religion courses frequently use the opportunity to inquire into their own beliefs.

What Can I Do with a Philosophy Major?

When our department faculty are asked what our philosophy alumni do for a living, the answer is they represent a wide range of professional fields. Alumni report their current employment to be in the following areas: Advocacy (non-profit), Banking, Business, Computers and IT, Consulting, Culinary Arts, Finance, Education (Primary, Secondary, Higher Ed.), Journalism, Law, Library Science, Marketing, Management, Military, Music, National Security, Oenology (Wine and Winemaking), Pharmacy, Psychology (Counseling and Research), Public Relations, Retail, and Sales.

The Department in 2012 surveyed all alumni in the last 15 years about their personal and professional satisfaction with the major. Our busy and mobile alumni were not always easy to reach, so the data received could not be certain to represent the whole group. But the results, particularly the personal success stories, did suggest high appreciation for the benefits of the major in professional and daily life.

Of the alumni we reached and who responded, nearly 70% completed a graduate degree. Almost half of those degrees were doctorates, usually in Law or in the Humanities. Virtually all respondents agreed with the statement, “I am aware of using various aspects of my philosophical training in my current job and/or professional capacities,” and the same result for the statement, “Studying philosophy has overall enhanced my life.” Around 80% of respondents agreed that, “Regarding my work or professional life, I am fairly satisfied with my choice to study philosophy, I would not do differently again.” A few alumni related that philosophy enhanced professional success particularly when combined with a practical area of study.

Finally, virtually all responding alumni expressed a high level of satisfaction with the education they received in the program. R.J. Donovan ‘04 spoke for many of our grads about learning how to write well in the major, “One must write capably and easily in a modern professional environment.” (Donovan has since graduation worked in a diverse range of fields, including Education, Law, International Business, and Culinary Arts.) Caroline Steele ’06 summarized the general feeling about the quality of education received in our program, “I spent every day for four years thinking about what it means to be a human and how to be a better one. Nothing, nothing, could have been a more worthwhile expenditure of my time.”

When it comes to Graduate Record Exam scores for admission to graduate programs philosophy students do notably well. Physics majors are at the top among natural science students, economics majors top social science students, and philosophy majors have earned top scores among humanities students. Philosophy majors consistently score the highest of all majors on the verbal as well as the analytic writing portions of the GRE.

Philosophy and religion undergraduates consistently perform remarkably well on the standard Law School Admission Test. Law professors from top schools have noted a connection between early success in law school and having majored in such fields as philosophy, literature, mathematics, and physics.

Philosophy majors consistently score near the top among all majors on the GMAT exam, ahead of business and economics majors.

Finally, Founding Father John Adams long ago recognized the importance of studying the discipline in making decisions of lasting social and political importance. ‘I must study Politicks and War that my sons may have liberty to study Mathematicks and Philosophy. My sons ought to study Mathematicks and Philosophy, Geography, natural History, Naval Architecture, navigation, Commerce, and Agriculture, in order to give their Children a right to study Painting, Poetry, Musick, Architecture, Statuary, Tapestry, and Porcelaine.’